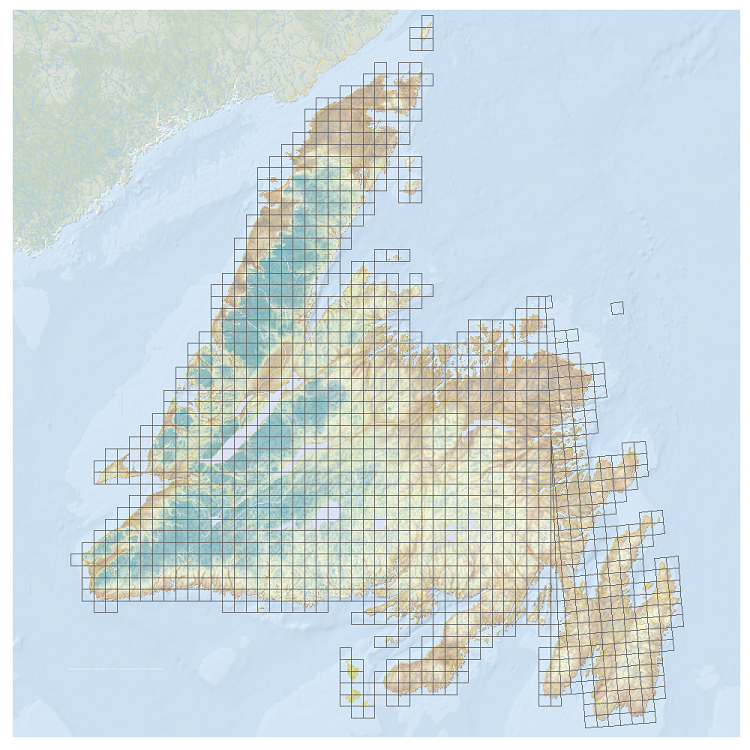 The first step is to divide the area to be surveyed into 10 km × 10 km squares, which are the basic units of atlassing. In Newfoundland, this produces a total of 1485 squares. Between 2020 and 2024, these squares are systematically surveyed for evidence of breeding birds.

We want to collect data from as many squares as possible, but we know we won’t be able to get to every single one. The challenge is to ensure that our coverage is spread out across the entire island and is representative of all different habitat types available. The solution is to designate “priority squares”, which are our first targets for surveys. For the Newfoundland atlas, we have designated 372 squares (25%) as primary priorities, and an additional 231 squares (15.5%) as secondary priorities. The other 882 squares are low priority. However, that doesn’t mean you shouldn’t submit data from these squares if you happen to collect it! But we are hoping birders will target primary and secondary priority squares first for surveys.

How do you “Atlas” for birds?

There are three types of sampling methods involved in atlassing. The first method, called ‘general atlassing’, consists of finding evidence of breeding for as many species as possible within an atlas square. For example, singing birds in their breeding habitat during their breeding season are recorded as ‘possible’ breeding; pairs of birds, agitated, or displaying birds are considered ‘probable’ breeding, and nests or fledged young are recorded as ‘confirmed’ breeding. Data collected during general atlassing provide information on the distribution of bird species across Newfoundland.

The second sampling method is called point counting. Data from point counts are used to estimate the relative abundance of bird species across different squares, to give a picture of where the populations of each species are concentrated. Collecting abundance data through point counts will be optional for atlassers, but will be encouraged for experienced birders, provided they can identify most birds in their area by song.

The third sampling method involves collecting more precise documentation about the breeding sites of rare species and colonial species. Participants will be encouraged to fill out nest record cards with detailed information for any nests they find; however, particular emphasis will be placed on species that are rare in Newfoundland or within the region, as well as species that nest in colonies, such as many seabirds. Details of breeding locations and the size of colonies are submitted on special data forms.

Square surveys can be spread out across the 5 years of data collection (2020–2024). Squares are considered complete after 20 hours of general atlassing and 15 point counts have been conducted

Casual observations – that is, breeding evidence observed on occasions where your primary purpose is not atlassing – should also be submitted to the atlas. While incidental data cannot be used to determine species absence, it is very useful for establishing presence!

Atlassers may wish to be assigned one or more specific squares, meaning they are taking on responsibility for ensuring coverage targets are met in that square.  We welcome this approach! However, atlassers with assigned squares should still submit data for any other squares they spend time in, and other atlassers who spend time in ‘assigned’ squares should also submit their data.