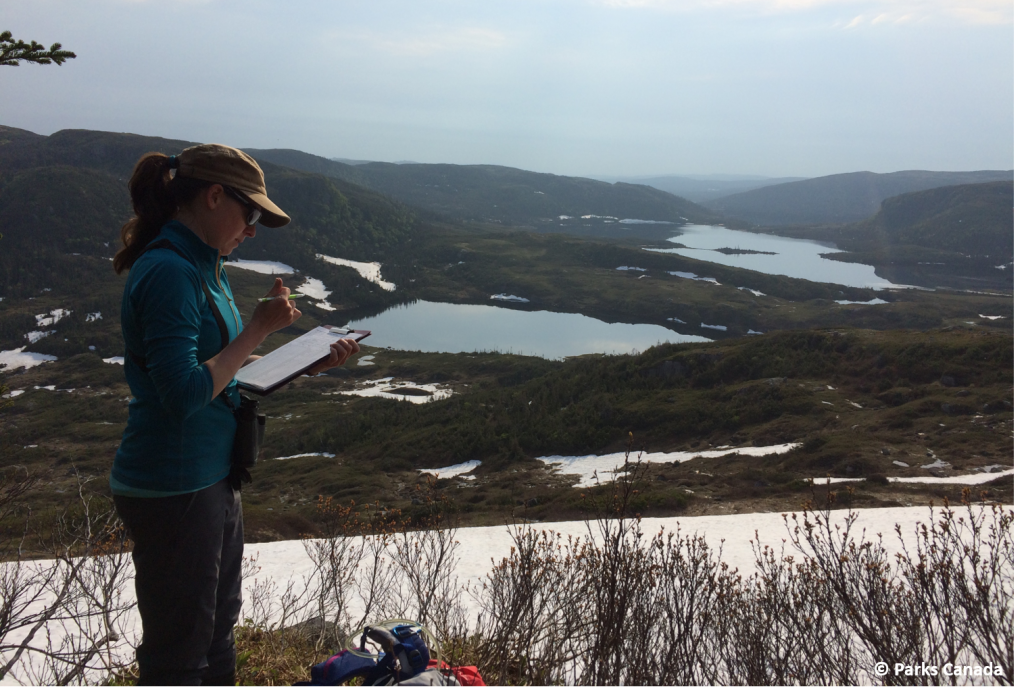 What is a Breeding Bird Atlas?

A Breeding Bird Atlas is a project that maps the distribution and relative abundance of breeding birds over a large geographic area such as a province, state, or country. Atlases follow a standardized methodology and are designed to be repeated at 20-year intervals, which allows changes in bird populations to be tracked over time. Newfoundland’s first Breeding Bird Atlas will be an open access, comprehensive digital account of the status of breeding birds on the island. The Newfoundland Atlas will provide an invaluable resource for industry, government, conservation organizations, academic institutions, and the general public, for purposes spanning the spectrum from conservation planning and environmental assessments to environmental education and research projects.

What can birds tell us?

Birds are good indicators of environmental health because they are conspicuous, occur in all ecoregions and habitats, and respond quickly to environmental stressors and habitat change. As a result, Breeding Bird Atlases have tremendous potential for monitoring not just bird populations but other biological and environmental changes.

Anyone with a pair of binoculars and birdwatching experience, or even a desire to learn about birds, can participate! However, it does help to have some experience and familiarity with how to identify birds. You don’t need to be an expert – we just ask that you are confident in the identification of the birds that you report.

How does the Atlas work?

The Newfoundland Breeding Bird Atlas is a scientifically designed, five-year project to assess the status, distribution, and relative abundance of all bird species breeding on the island of Newfoundland. Data collection for the Atlas will begin in 2020 and continue through to the summer of 2024. Atlases depend heavily on citizen scientists, and the participation of volunteer birdwatchers who contribute their time and skills to collect data will be key to the success of the Newfoundland Atlas.

Atlases are typically repeated every 20 years to document changes in bird distribution that may reflect changes in forestry and agriculture, urban expansion, natural disasters, climate change, other natural or man-made forces, and ultimately ecosystem health. The Newfoundland Breeding Bird Atlas will help to establish a baseline against which future change can be compared.

Breeding Bird Atlases have been produced for most of the provinces and states across North America, and for many European countries. Some jurisdictions have completed two or more atlases. However, this will be the first atlas to document the breeding birds of Newfoundland.

The Newfoundland Breeding Bird Atlas will be a living document and a legacy for all Newfoundlanders. Over the course of the next five years, the data pages of this website will be regularly updated, as we receive more and more data from atlas participants. The maps displayed on the webpage will be interactive, allowing you to view a specific region or square, or the province-wide results for any given species. After data collection is complete, we will publish an online book which will include various spatial analyses and refined abundance estimates. The data themselves will be stored in a fully-searchable database containing details of specific observations that will be available for use by scientists, environmental assessors, municipal planners, students, and other.

The island of Newfoundland has a rich ornithological history which spans the development of the modern disciplines of biology and ecology, and which is carefully reported in Montevecchi and Tuck’s book Newfoundland Birds: Exploitation, Study, Conservation (1987). Though some naturalists provided early documentation of Newfoundland’s birds, systematic scientific study began with Joseph Bank’s natural history expedition in 1766. During that voyage he documented 34 species from Newfoundland and collected some of the first ornithological specimens from North America. This initiated an extended period of natural history and specimen collecting, including a visit by Audubon in 1833, which continued off and on through the 19th century.

The first half of the 20th century, which preceded confederation with Canada, saw a period of increasingly detailed documentation of Newfoundland’s birds, highlighted by the agreement between the Newfoundland Department of Natural Resources and the U.S. Fish and Wildlife Service to carry out a cooperative systematic avifaunal investigation. This resulted in Peters and Burleigh’s The Birds of Newfoundland (1951), which was illustrated by Roger Tory Peterson and remains the most comprehensive work on the biogeography and natural history of Newfoundland’s avifauna. This study added several species to the list of birds known to occur on the island and presented detailed accounts of species distributions, so it is not a stretch to say that their work represents the first attempt at a Newfoundland bird atlas.

An interesting focus during this period was the identification of island endemic subspecies, and more than 20 Newfoundland bird races and subspecies were proposed based on study of morphology and coloration, including Winter Wren, American Robin, and Rusty Blackbird. Modern molecular genetics is now confirming the validity of many of these subspecies, including such well known birds as Rock Ptarmigan, Boreal Chickadee, Canada Jay, and Gray-cheeked Thrush. It is now believed that a Pleistocene glacial refugia existed on the continental shelf south and east of Newfoundland, and that this supported these Newfoundland endemics through the last Ice Age.

Confederation with Canada in 1949 ushered in the era of modern ornithology, enabled and supported by the arrival of such institutions as Memorial University, Sir Wilfred Grenfell College, and the Canadian Wildlife Service. Since Confederation, there has been a strong focus on seabirds and seabird colonies, which stems in part from a long-term focus on marine biology at Memorial University. As a result knowledge of the ecology, conservation and biogeography of Newfoundland’s marine birds is likely as good as anywhere in North America. In contrast, landbirds have been the focus of far fewer scientific studies, and most of the systematic studies that have been carried out were situated in balsam fir forests of western Newfoundland. This focus has stemmed at least in part from the need for research related to environmental aspects of the region’s well developed forest products industry. Knowledge of landbird biogeography is also relatively comprehensive on the Avalon Peninsula, in part due to the presence of Memorial University but especially as result of the devoted efforts of the region’s avid birdwatching community. In contrast, our knowledge of landbird distributions is much lower in central Newfoundland, along the south coast and Burin Peninsula, and on the Great Northern Peninsula north of Gros Morne National Park. 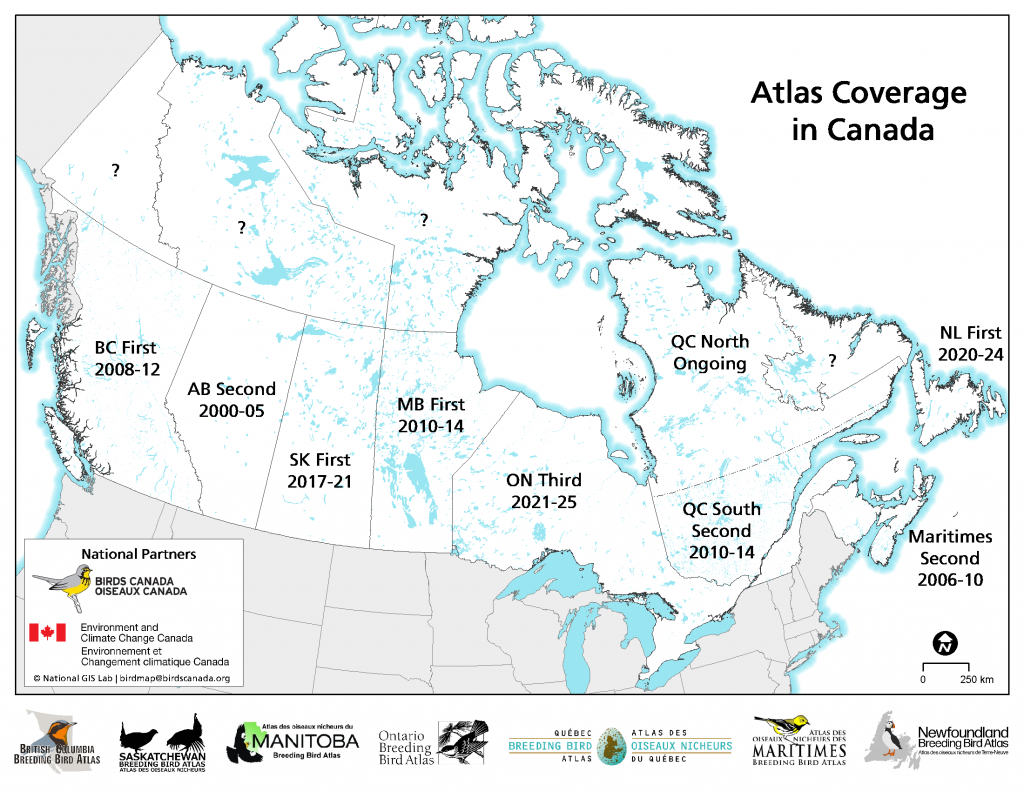 The National Atlas Program is a partnership between Birds Canada, Environment and Climate Change Canada, provincial governments, natural history organizations, and the private sector. Since 2000, Breeding Bird Atlases have been completed or are underway in Ontario, the Maritimes, British Columbia, Manitoba, Quebec and Saskatchewan.

Each Atlas is a minimum eight-year undertaking – a start-up year, five years of field surveys, and two years of publication. The average price tag is $250,000 per year. That financial cost is matched by skilled volunteer citizen scientists – members of the provincial nature societies and the birdwatching public – who typically contribute >10,000 hours per year conducting field surveys.